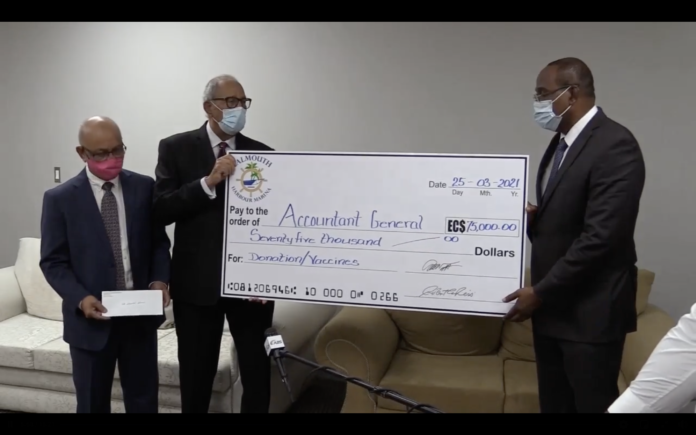 Sir Gerald A Watt, Chairman of Antigua Investment Group (AIG), and Mr. Robert Reis, General Manager of Falmouth Harbour Marina made a donation of $75,000.00 towards the Government’s Vaccine Program.

Antigua Investment Group Limited operates Falmouth Harbour Marina, an Antiguan and Barbuda company operating for 25 years. According to the shareholders, it is the first locally owned company that operates a marina in Antigua and Barbuda.

During the Cheque handover ceremony, Chairman AIG said, “Mr. Prime Minister we are particularly pleased to present this cheque in the sum of $75,000.00 to your vaccine drive. We do so because we are very pleased with the way in which health people have proceeded to deal with this matter in the face of much criticism, not all of it sensible. We also are pleased with the way in which you have shouldered the responsibility and the active way in which you have proceeded to source vaccines rather than sitting back and hoping for the best. And as I have said before, you have done so amongst grave criticism.”

Sir Gerald continued by stating, “We would like to have made a larger contribution but we have suffered a 60% drop in the last year so we are not going to have a profit this year or if so, very little, but we are standing ready to help in some other way as we have done in the past.”

In accepting the timely contribution, Prime Minister Gaston Browne said, “I take this opportunity to give thanks on behalf of the Government and people of Antigua and Barbuda for this very generous contribution from the Antigua Investment Group that is doing business as the Falmouth Harbour Marina. $75,000 is a sizeable contribution and is certainly among the size of the other contribution we have received. So we are very appreciative of it and we know it comes at a very difficult time during a period of COVID where you would have seen a reduction in your revenue by about 60%. So the fact that you are making such a sizeable contribution demonstrates your commitment and certainly your social responsibility to the people of Antigua and Barbuda. We hope that other companies will follow your lead.”

According to Robert ‘Bobby’ Reis, General Manager for Falmouth Harbour Marina, this donation represents the company’s culture of strong corporate social responsibility. Mr. Reis explained that during the height of the pandemic in 2020, the company prepared and delivered food packages to families in need and single-parent families for six months.