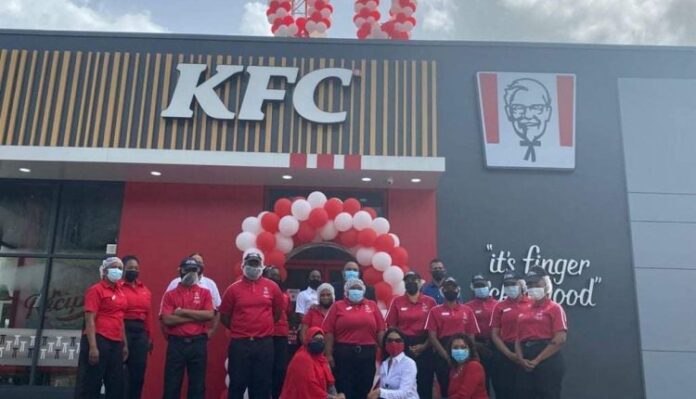 CEO Simon Hardy said the restaurant was set to be open in April, but Prime Minister Dr. Keith Rowley’s announcement that restaurants would be shut down as a COVID-19 precautionary measure put the launch on pause.

“This store was actually planned to open before the shutdown. We were about two days from opening it when we had the surprise shut down at the end of April,” said Hardy, who expected the new restaurant to be a success given the brand’s popularity over the years.

“KFC is a very strong brand in Trinidad and Tobago and it has been here over 45 years now,” said Hardy.

KFC in a social media statement on the opening of the restaurant, also noted the success of the brand in Trinidad and Tobago.

“Expanding operations creates even more career opportunities in the fast food industry and shows the confidence the brand has in the local economy. This opening reinforces KFC Trinidad & Tobago as the world’s most penetrated KFC market,” the restaurant chain said in the release.

Despite their popularity Hardy said there were no plans to open another KFC restaurant this year.

“We have no plans to open any new KFC  outlets this year in terms of development. Obviously if developments come on board, if it makes sense, we will continue and monitor,” said Hardy, who however noted that another popular franchise under the Prestige umbrella – Starbucks – would see expansion.

“ Across our other brands apart from KFC, Starbucks is also adding stores. We added another one in Gulf View in February and next month we expect to open one in Shops of Trincity,” said Hardy, who also explained that plans for a Grand Bazaar branch were also being considered.

KFC acknowledged that patrons will not be able to dine in at the “a sleek new modern “R.E.D.” design” of the new restaurant but “ patrons of this restaurant can expect the same delicious, mouthwatering chicken via takeaway, drive-thru, curbside pickup, home delivery by calling or ordering in the app.”

The restaurant chain continued, “The management and staff of KFC reminds the public that Covid-19 protocols are being adhered to at this as well as all locations nationwide and we wish to thank all our loyal customers for their patronage.”