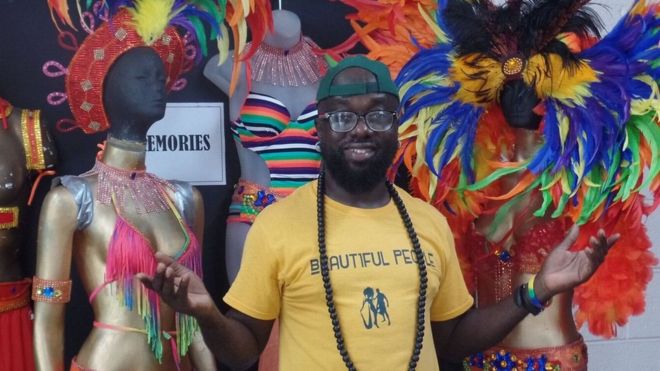 In a former shop wedged among the candy-coloured buildings of St John’s, artisans armed with glue guns and wire, sequins and scissors, are at work to the beat of an infectious soca rhythm.

Haughty-looking mannequins bear the fruits of their labour, a kaleidoscopic array of costumes ready to transform the streets of Antigua’s capital into a vibrant spectacle during August’s Carnival parades.

Every year, in the run up to the festivities, back rooms and disused offices across the island are cleared out to make way for designers, seamstresses and the florid materials of their craft.

These are the informal mas’ (short for masquerade) camps where the bulk of the outfits are still painstakingly created by hand, conceptualised by designers keen to flaunt their talent and secure bragging rights on the road.

This year the stakes are even higher as the Eastern Caribbean nation marks the diamond jubilee edition of the much-loved event.

Two hundred years may have passed since Antiguans first hit the streets in a display of pageantry to celebrate freedom from slavery, but time has done nothing to diminish Carnival’s electrifying atmosphere and bonhomie.

The costumes remain central to the occasion, first commemorated officially in 1957.

In those days the vivid ensembles included plantation-style dresses and bonnets, witches and skeletons, soldiers and majorettes.

“The costumes used to be larger; some had to be rolled along on wheels,” says Calvin Southwell, head designer with the Beautiful People troupe.

“Now the materials are lighter so you can wear them more easily for hours. And they’re a lot skimpier too,” he adds with a grin.

Influences from Rio de Janeiro’s parades are evidenced in the bikinis and feathers which characterise contemporary Caribbean carnival garb. But Antigua has maintained many of its indigenous themes and traditional techniques.

An elaborate piece can take several days to put together.

“Back in the day, go-to materials were lamé, reflective paper, cardboard for the frame, and wire to stop it falling apart if it rained. Often they would incorporate cultural elements like the cathedral or a man on a donkey,” Mr Southwell, a fashion designer by profession, explains.

“Now I use things like chiffon and lace. I might recycle exotic materials like feathers from an old hat. And that bustier was made from an old evening gown,” he says, indicating a shimmering, diamante-studded garment.

From designing the pieces to completion is a six-month process. The Beautiful People troupe has a core team of 10 volunteers who bring 400 outfits a year to fruition.

“We make everything locally; we don’t import anything except raw materials, like feathers from China and various bits from the US and Trinidad,” Mr Southwell continues.

“We want to keep it totally Antiguan and making everything here preserves our uniqueness. We still incorporate elements of our culture, such as our national ‘madras’ fabric. We believe in keeping the art form alive; incorporating children into costume production is very important,” he says.

Mr Southwell has been taking part in Carnival for over four decades.

“I started playing mas’ when I was nine; it was a reward for doing well in school and I have done it ever since.

He adds: “Having a band is like giving birth; you nurture it, look after it and watch the costumes come to life on the streets. When you see people’s reaction, that’s when you feel most proud.”

Janna Henry knows what he means. As lead designer with the Insane troupe, she heads a team of 50 people who create more than 600 costumes each season.

“Around 80% of everything we make is by hand, particularly our feather pieces,” she says.

“Some people think it’s a dying art but that’s not our experience. Most of our volunteers are teenagers who come just because they want to learn.”

One modern material the group employs is a sturdy foam, similar to the type used in flip-flops and ideal for crafting accessories.

“The secret is coming out of the box and doing something people haven’t seen before,” Ms Henry says.

“We are all former mas’ players so we know what’s comfortable, appealing and looks good on the road.

“It’s a tropical climate so the sun plays an important role. Metallic fabrics and sequins which reflect the light, and also look good under artificial lighting and flash photography, is a key strategy,” she explains, adding: “You have to blend the colours well too; people like lots of vibrant colours to look festive.”

For Roger Perry, of the Festivals Commission, the real magic takes place during the final parade on Carnival Tuesday, early each August.

“That’s when you get to see all the costumes, craftsmanship and artistry,” he says. “Against the lights, the music and the glow, it’s just beautiful.”