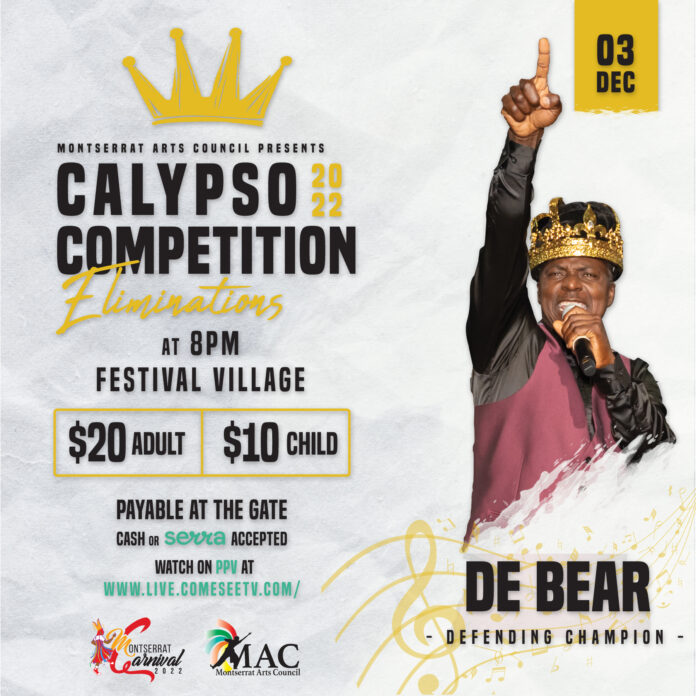 Head of the calypso committee Theodore Phillip said a total of 33 people are currently rehearsing with the Black Rhythms Band, which is led by former calypso monarch and songwriter Cecil “Cepeke” Lake (1987, 1990, 1999), for the first competition of the season.

“After the eliminations only 15 people will move on to the semi-finals,” Phillip told hosts of the Carnival Vybz show on ZJB Radio Montserrat on Friday.

The committee chair said the first performer will be on at 8PM and everyone is encouraged to get to the park early. The show will also be available to watch on pay-per-view and on demand via comeseetv.com.

“We are looking forward to kicking off the season with Calypso Eliminations. It’s usually a crowd favourite but the fact that we’re going back to Festival Village after two years, adds even more excitement to the event,” added Sharlene Lindsay, Head of Planning & Production for the Montserrat Arts Council.

The 33 calypsonians include several newcomers and former monarchs. Anticipation is high to hear newcomer Destiny Weekes, the daughter of five-time monarch Everton “Reality” Weekes, who is considered one of the island’s top calypsonians from the 70s and 80s.

Along with the opportunity to compete in the finals against multi-crown and multi-island monarch Keithroy “De Bear” Morson, the performers, songwriters and arrangers can win cash prizes amounting to more than $10,000.

Bank of Montserrat Ltd. Montserrat Tourism Division, and Friends of Calypso in the Diaspora have sponsored the special prizes in categories, including Best Environmental Song, Best Newcomer, and Crowd Favourite.

The top 15 selected will compete in the semi-finals show which follows the official opening of Montserrat Carnival 2022 on Saturday, December 17, 2022. The Calypso Finals is slated for Thursday, December 29, 2022.