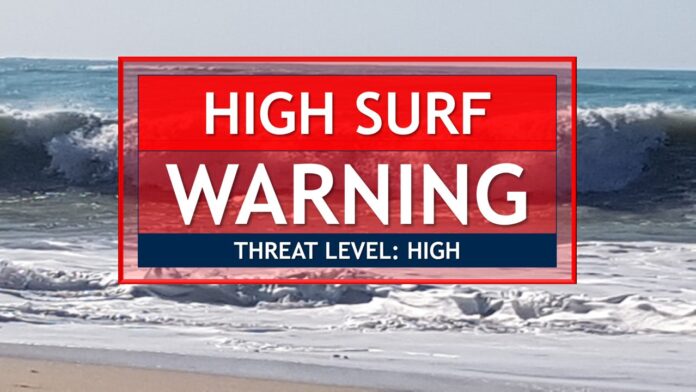 The Northeast Caribbean is in the midst of its most significant swell event for the year.

Strong winds associated with Tropical Disturbance AL99, which has morphed into a large and powerful extratropical cyclone, centred about 2500 km (1500 miles) away, are pushing relatively large swells toward the Northeast Caribbean, including Antigua and Barbuda and the rest of the Leeward Islands and the British Virgin Islands.

Swells started to arrive last Sunday and will continue through next week. Swells peaked over 2.7 metres (9 feet) on Monday and will peak even higher, above 3.5 metres (12 feet), over the next 24 hours.

Swells are expected to decline a bit after the next 24 hours and will again peak at over 3 metres (10 feet) on Monday.

Animation of forecast swells moving across the region from Tropical Disturbance AL99, as predicted by the European Centre for Medium-Range Weather Forecasts (ECMWF) wave model (WAM). Time in UTC.

This will be no Swellmageddon but neither is it your garden variety swell event.

Naturally, a high surf warning is in effect for a number of islands.

As usual, these swells will be virtually harmless in open waters, but they will be a very different “kettle of fish” when they run up on reefs and particularly northern and north-facing coastlines which are relatively shallow and gentle to moderately sloping.

In these environs, surfs (breaking swells) could be as much as twice the height of swells, as they crash onto shorelines.

Precautionary actions: No one should enter the waters of the main warning areas: northern and eastern coastlines.

All are also urged to stay away from rocky and or coastal structures along affected coastlines.

The year’s worst swell event could cause, will likely continue to cause or cause, among other things:

The low-pressure area generating the current swells has the potential to become a tropical cyclone.

The probability of this happening stands at 10 percent but earlier this week stood at 50 percent.

A second low-pressure area will power the swells across the area late next week as the present one moves to the distant North Atlantic.

The impact of the associated swell event will be felt well beyond the Northeast Caribbean. Powerful swells are expected to reach Guyana in the south and the Bahamas, in the west. Impacts will also be felt along the East Coast of the United States, Canada and eventually Northwest Africa and Europe.

Tropical Disturbance AL99 does not have the structure to be declared a tropical cyclone; however, it has winds of tropical storm strength and gusts to hurricane force.

Clearly, none of these harsh winds will reach our shores but the sea swells they are pushing will.

The impact on shorelines will not be the same everywhere. Depending on the depth, size, shape and the natural shelter of the coastal waters, the impact will be different.

Shallow north-facing shorelines are expected to see the highest swells and surfs.