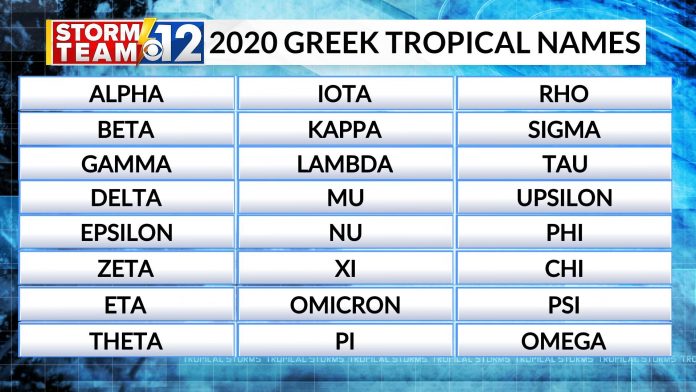 The 2020 Atlantic hurricane season used up its entire names list and has begun using the Greek alphabet for the rest of the season’s named storms for only the second time ever.

If that wasn’t enough, later Friday afternoon, Tropical Depression Twenty-Two in the Gulf of Mexico was upgraded to Tropical Storm Beta.

So, in the span of six hours Friday, we not only used up the last name in the 2020 Atlantic hurricane season names list, but we also rolled through the first two letters from the Greek alphabet, which is used for storm names once the season’s list of names has been exhausted.

According to Tomer Burg, a PhD candidate at the University of Oklahoma, since 1933 there had never before been 3 new storms that had formed within a 24-hour period in the Atlantic Basin, much less Friday’s six-hour period.

As you might imagine, this flurry of activity Friday spurred the sense of humor of meteorologists.

The only other time the Greek alphabet had to be used was during the record-breaking 2005 hurricane season.

How deep could we go into the Greek alphabet in 2020?

Therefore, an average season would take us through Eta or Theta in the Greek alphabet list before the end of this season, either tying or breaking the record number of storms from the 2005 hurricane season (28 storms, one of which was unnamed and added after post-season analysis by the National Hurricane Center).

After Sept. 18, 2005, following the formation of Hurricane Rita, another 11 storms formed the rest of that season.

So brush up on your Greek alphabet. You’ll need it the rest of this frenetic hurricane season.