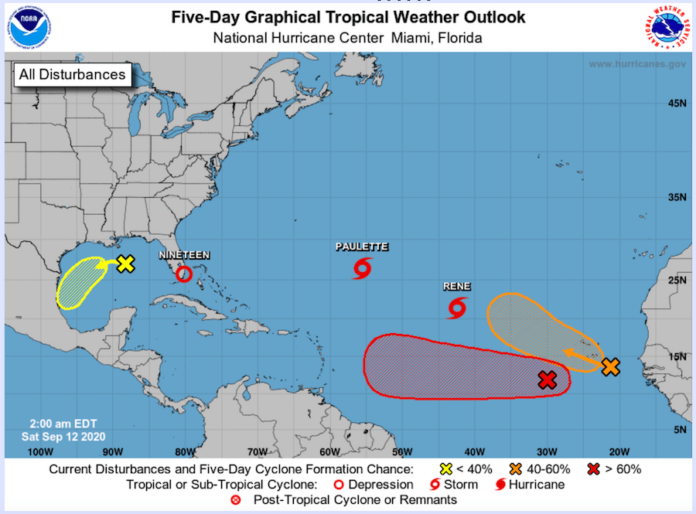 There are only four storm names remaining for the 2020 Atlantic hurricane season before forecasters have to implement the Greek Alphabet system.

The 2020 Atlantic hurricane season has been forecast to be “extremely active”, according to the National Oceanic and Atmospheric Administration (NOAA).

In its revised forecast for the season last month, the agency predicted there will be 19 to 25 named storms in the season.

Of these, seven to 11 storms are predicted to become hurricanes, with three to six of those are forecast to be major hurricanes of Category 3 or stronger.

Seventeen storms have already been named for the 2020 Atlantic hurricane season – which runs from June 1 to November 30.

If more than 21 storms develop, the additional names are taken from the Greek alphabet.

This happened only once in recorded history when in 2005 – 28 storms required names.

The NOAA has never forecast up to 25 storms in a season.

The latest two tropical storms to be named are Paulette and Rene – with Rene being the earliest appearance of an R-named storm on record.

The remaining names are Sally, Teddy, Vicky and Wilfred before additional names can be taken from the Greek alphabet.

The 2019 season marked the fourth consecutive year of above-average activity in the basin and was tied with 1969 for the fourth most-active hurricane season on record, according to the weather agency.

Tropical Storm Arthur became the first named storm of 2020 on May 17, forming some two weeks before the formal start of a hurricane season.