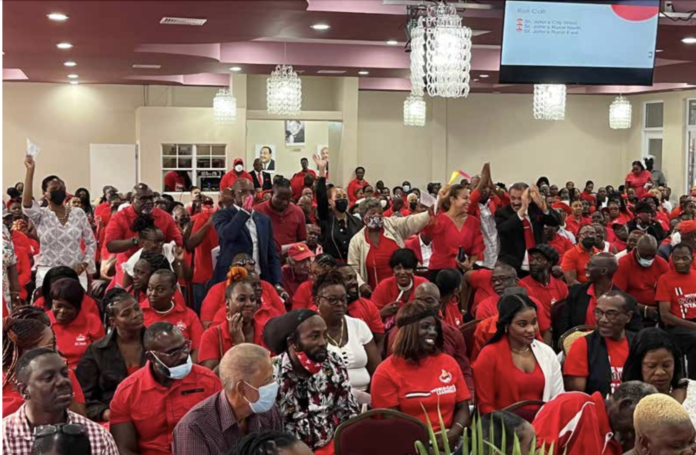 POINTE XPRESS: The ruling Antigua and Barbuda Labour Party (ABLP) took a definitive step in its preparations for general elections on Sunday when it endorsed the slate of candidates who will contest the polls which are constitutionally due by March next year.

During the party’s convention yesterday afternoon at its new headquarters on Nugent Avenue, there was standing room only as the ABLP’s seventeen candidates were introduced to rousing applause.

The convention heard from Chairman of a Suitability Committee, Hilroy Humphreys, who headed the team selected to interview the persons who presented themselves as potential candidates.

Humphreys said four candidates were interviewed for the All Saints East and St. Luke seat, however, Col- in James was ultimately selected as the most suitable candidate.

An identical number came forward in Barbuda, but Senator Knacyntar Nedd got the nod.

In St. Peter, two candidates presented themselves, but the three-member Suit- ability Committee voted for Rawdon Turner as the preferred candidate.

The other candidate, the incumbent Member of Parliament for St. Peter’s, Asot Michael, was deemed unsuitable by two of the three members of the panel.

Humphreys explained that the committee was only empowered to make recommendations, with the final selection of candidates left to the selection of the convention.

Following several amendments to the party’s constitution, the seventeen candidates presented were all approved by the convention.

This now finalises the party’s slate for the upcoming elections.

In his remarks, Chair- man, E. P. Chet Greene said the ABLP has proven itself through its record of achievements over the past eight years. Among them, he identified the government’s handling of the coronavirus pandemic.

“We introduced measures to keep our economy afloat and to continue paying government workers and paying pensions, even though the economy had declined by more than 20 per- cent and government was getting little or no revenue. We fought hard to ensure there was at least one person per household being paid,” he said.

According to Chairman Greene, people are now back to work, hotels have re- opened and ports of entry to the country are bustling.

“There is no denying that our economy is bouncing back, that has happened de- spite the blows delivered by COVID-19 and, it happened only because the government of this great ABLP rose, once again, to the occasion of safeguarding our nation’s economy and protecting the welfare of our people,” he declared.

Delivering the feature address, the ABLP’s Political Leader, Gaston Browne, gave a stirring account of his administration’s stewardship of the nation’s affairs since taking office.

He recalled the significant sums spent by the government on education from the preschool to tertiary levels, with student grants amounting to over $240 mil- lion since 2014.

Other expenditure on education has included the expansion of most secondary school plants and the crowning jewel of the counry’s education system, the fourth landed campus of the University of the West Indies located at Five Islands.

The ABLP leader also detailed his administration’s expenditure in other sectors of the economy:

Tens of millions to im- prove and expand the health care infrastructure.

Over 1000 subsidised homes valued at over $300 million

Over $100 million to upgrade and expand the infrastructure of the country’s schools, including the co struction of the Sir Novelle Richards Academy.