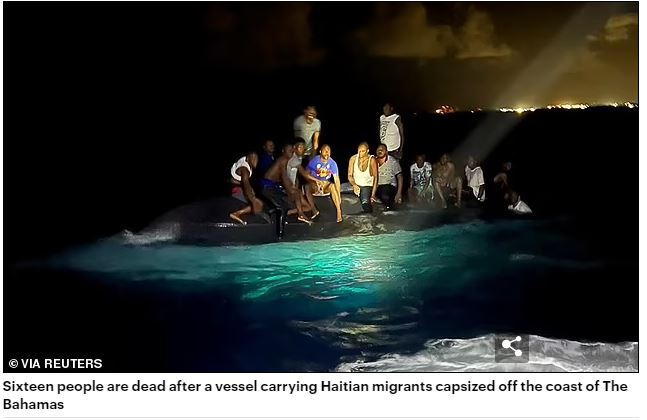 DAILY MAIL: Sixteen people are dead after a vessel carrying Haitian migrants capsized off the coast of The Bahamas. CLICK HERE TO JOIN OUR WHATSAPP GROUP FOR NEWS UPDATES.

It comes amid a continuing wave of sea migration toward the United States, including more than 150 having to be saved off Florida on Thursday.

‘We mourn lives lost of those seeking a better way of life,’ Bell said. ‘Those here with families and friends in Haiti, encourage your loved ones not to risk their lives.’

The Bahamas police said the boat capsized some 7 miles (11 kilometers) off the island of New Providence.

The Bahamas is a frequent transit route for Haitian migrants seeking to reach the United States.

It comes just days after The US Coast Guard averted what may have been a disaster when it intercepted a ramshackle sailboat off the coast of  Florida.

Extraordinary images show at least 150 men, women and young children crowded on the boat with no floor place to move on the wooden vessel near Miami.

The US Coast Guard, Miami-Dade police and other law enforcement agencies were on the scene after they intercepted the sailboat on Thursday morning.

The US agencies deployed four boats to surround the ramshackle sailboat before moving closer to toss the migrants life jackets and water.

The migrants were transferred from the ‘overloaded and unsafe sailing vessel’ to the Coast Guard cutter crews, officials said.

The migrants will then be repatriated to their country of origin, the US Coast Guard said.

A crumbling economy and and a spike in gang-related violence and kidnappings has prompted thousands of Haitians to flee their country in the past year.

Local Carl Ball was fishing when he saw the overcrowded sailboat filled with people – and within minutes the agencies arrived at the scene.

‘As I went south, I saw a sailboat sideways and the sails were off to the side and an MDFR boat was next to it,’ Ball told Local 10. ‘They were standing up there on the deck.’

Officials have not confirmed where the migrants are from, but they are believed to be from Haiti where people are facing gang violence and kidnappings and a shortage of both fuel and electricity is threatening daily life for millions.