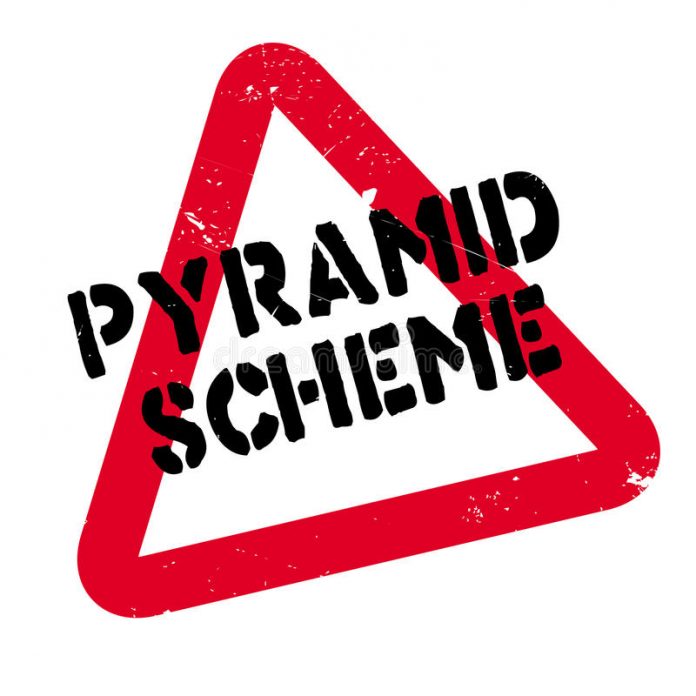 Less than two weeks after the Financial Intelligence Unit (FIU) warned the public about getting involved in pyramid schemes, a “Blessing Circle” with over 1,200 members has “crashed,” leaving the majority of its members without their hard-earned money.

The Blessing Circle is just a disguised pyramid scheme and while “admins” give the groups different names, calling some “sou-sous,” they are all the same basic scheme, according to the Financial Intelligence Unit (FIU).

In the pyramid scheme group called “Blessing Overflow,” members were asked to pay $700 to join with the promise that they would receive over $18,000 in “blessings.” The payout was dependent on recruiting new members to ‘invest.’

Now, group members are hunting for a man known only as “Cazim,” who was said to be the group administrator. Their hunt began several days ago when “Cazim” sent the following message via Telegraph to 1,272 members: “The main purpose of this activity was to help each other minimise their financial bondage which would have assisted (not give) in helping one attain financial stability. Due to unforeseen circumstances, it is with deep regret, Blessings overflow has suffered a lost in the investment of monies which has caused us to come to a complete halt (crash).

“With the decreasing volume of people investing within this sou-sou and many other factors and indicators, we found it to be the reason as to why we can’t generate enough profit to continue the flowers. We would like to thank all who have participated and entrusted in us, but we would also like to remind you about the rules. (Non-refundable) this was a risk! You’ll agreed to take this risk and the payment was an 8:1 ratio. This is far beyond our control and we do sincerely apologize. If you have any further questions please contact the administrator that advised you to the group. Thank you.”

Immediately after he sent the message, “Cazim” changed the group’s setting, barring its participants from responding to his message.

But the group’s members were able to continue communicating with each other by changing the group’s name.

“Who is Cazim…somebody must know him!!! Send some kinda information plz,” one member wrote.

“Imagine Cazim gone with we good good 700 nah he hadda feel it,” another wrote.

Others said they were never told their ‘investment’ was non-refundable. Threats against “Cazim’s” life soon began to pour in.

One member found a photo which they claimed was of “Cazim” and changed the group’s icon from a bag of money to the photo. “Cazim’s” Facebook profile name was also shared with the group.

Guardian Media reached out to the Trinidad and Tobago Police Service (TTPS), asking if there were any reports of people being scammed in the ‘Blessing Circle.’ However, TTPS corporate communication’s manager Francis Joseph said the police had no comment and did not respond to any other questions.

But the Blessings Circle is not the only group to crash in recent days. Several days ago, a screen recording from another Telegraph group was released on social media.

The “admin” sent a voice note to the group, saying, “Alright, I fed up watch and read and try to keep up and all kinda thing- hear what is the real scene- just like every other of those groups in Trinidad, this one just crash and that $700 was non-refundable, right?

“Everybody, when they join the group, know it was a risk, so that being said you all have a blessed night.”

But in response to her message, one member replied with a voice note, laced with expletives, threatening the member who she paid her $700 to.

The Facebook Marketplace, where groups are created to buy and sell products and services, has also been inundated over the past few days with posts encouraging the public to send private messages to join ‘blessing circles’ and ‘blessing sou-sous.’

Those who promote the schemes claim to have benefited from it already. There are different ‘investment’ amounts, ranging from $100 to $15,000, with thousands promised as payouts.

The FIU, in a recent release, said pyramid schemes can be recognised due to the following features:

• They require persons to join groups and make an initial contribution of money with the promise of a significant pay-out or return on their contribution at a later date.

• Early contributors to the scheme are paid from the money contributed by newer members. Existing members are encouraged to recruit new persons so that they can move to a different “level” or “circle” which promises higher returns on their contribution. The overall intention is to get to the “highest level” or to the top of the pyramid which will produce the highest pay-outs, while the new members, those at the bottom of the pyramid, receive the lowest returns on their contributions. When fewer or no new members join the scheme, it collapses and disappears along with the payment platform and the money that was ‘invested.’