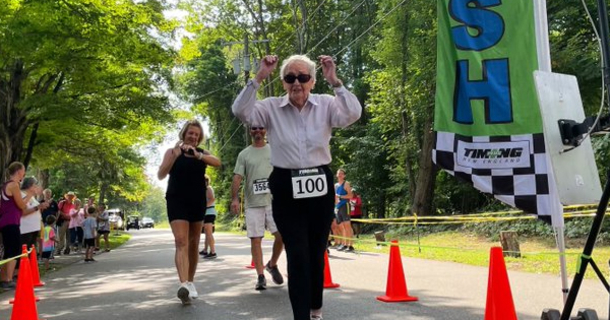 EAST HAMPTON, Conn. — They say an apple a day keeps the doctor away. For a 100-year-old Connecticut woman, the saying is more like a few miles a day.

Mick Roberts walks several miles a day and most recently completed a 5K road race that grabbed the attention of many people across the state.

With the Manchester Road Race on Thursday, it’s a good reminder that it’s never too late to get fit.

You got to go some, here we come,” the centenarian told FOX61 News recently.

A few days after her 100th birthday, Roberts took to the starting line at the Haddam Neck Fair Road Race, finishing the 3.1-mile course in 56 minutes.

“Yea I move right along,” she said.

For Roberts, walking is part of her everyday routine, leaving people in the dust that try to walk alongside her, like her son, Chuck, and daughter-in-law, Donna.

“She’s leading the way here,” Donna Roberts said. “She’ll lead us and we just follow and that just says it all.”

“She does walk two or three miles a day so doing a 5K isn’t that big a deal,” said Chuck Roberts, from East Hampton.

Crossing the finish line of the hilly 5K course wasn’t much of a challenge for the 100-year-old.

But it does create some healthy competition within the rest of the Roberts family.

“It obviously sets the bar pretty high so when my kids say, ‘oh no we don’t want to run the Manchester Road Race this year,’ I’m late grandma did the 5K so you people are running,” Donna Roberts said.

The elder Roberts walks at least two to three miles each day, doing laps around her senior living center at the Saybrook at Haddam or heading to the Airline Trail in East Hampton.

“I do it twice or three times a day, it doesn’t take very long. I just like to get out in the air and move, I don’t like sitting around,” she said.

“She always walked I think that’s why she’s as healthy as she is right now because she walked every day,” her son said.

Mick Roberts has had her fair share of hardships. She lost the loves of her life, her husband and two of her three sons. She even battled back after catching the coronavirus.

Now healthy and happy, every day she wakes up and strives to put a smile on people’s faces by spreading her joy for life.

“She’s an inspiration, I think she doesn’t think that she is it all, but it just comes from her heart she’s given so much,” said Donna Roberts.

“She’s a happy person, she says it’s not a big deal but I think most people say well to live to 100 is one thing but to live to 100 and be this active and enjoying life and still being engaging is a wonderful thing,” said Chuck Roberts.

She’s as sharp as a tack and her secret is simple – she doesn’t have one.

“I don’t want to boss anyone around, no,” Mick Roberts said.

But she continues to make people want to live life like her – not always being dealt the best hand, but taking each card in stride, and smiling each and every step of the way.

“Are we having a goodbye? Bye, see you next time! See you next year!” said Donna.

“That’s what you think,” said Mick.

The centenarian said she may decide to retire from race walking, but she continues to show even at 100 years old anyone can still do anything they set their mind to.