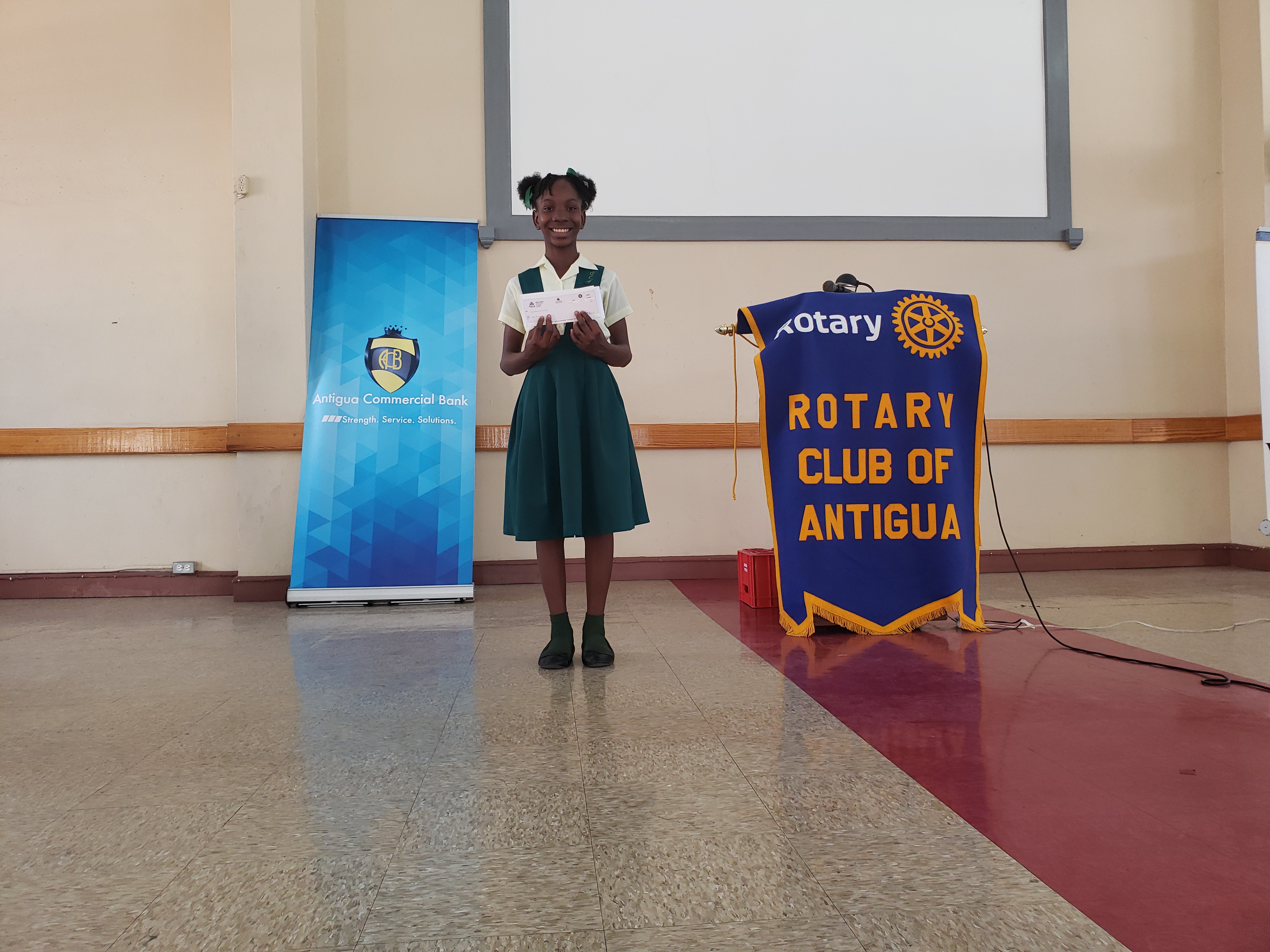 The Methodist Church Conference Centre was transformed into a platform for articulation, poise, confidence, creativity and expression as six primary schools engaged in a literacy battle in the 3rd annual Rotary Club of Antigua’s Reading Competition over the weekend.

The Grace Christian Academy School emerged on top for the 2nd year in a row, after four hours of a keenly contested competition.

Two locally authored books, The Wonderful World of Yohan and Jerimiah: Devil in the Woods were the two literary works that the participants were given to articulate previously selected portions in-front of their peers, parents, teachers and most importantly, the judges. Two students were chosen to represent each participating academic institution.

The students selected to read from the Wonderful World of Yohan were: Anijah Carr from the Foundation Mixed School, Zyon Williams from the Grace Christian Academy, Ma’Hailiyah Roberts who represented the St. Peter’s Academy, Unique Simon who represented the Sunnydale Primary School, Jonathan Gomes of the TOR Memorial School and Arianna Goodluck from the Wesleyan Junior Academy.

Jerimiah: Devil is the Woods was read by: Melrona Quinn from the Foundation Mixed School, Sachin Jacobs from the Grace Christian Academy, Anderson Small from the Sunnydale Primary School, Zion Samuel from the TOR Memorial School and Kevia Charles from the Wesleyan Junior Academy.

After the first entertaining and intense round where, the participants did their best to articulate the material before them, the pool was narrowed down to the top five students who moved on to the 2nd Round of the competition.

The top five students were: Anijah Carr and Melrona Quinn both of the Foundation Mixed School, Anderson Small from the Sunny Dale Primary School and Zyon Williams and Sachin Jacobs both from the Grace Christian Academy.

In round two, the students were judged on how effectively they could read while appropriately displaying the skills of a news presenter on audio-visual media, for example. Each finalist will read from a selected newspaper clipping and was seated at a desk, just as if he/she was in a studio reading the news.

They were also given another portion of the book that they read from in the first round to present.

In the end, it was Zyon Williams from the Grace Christian Academy who was the victor. Her counterpart, Sachin Jacobs was the 2nd place winner while Melrona Quinn from the Foundation Mixed School placed third.

Williams was also judged as the Most Confident Reader and the Reader with the Best Eye Contact. She received among her prizes, a fully Loaded Desktop Computer compliments Rotary Club of Antigua, a Kindle Tablet compliments Service Projects Director Kirk Francis, $300 from APUA, stationery from Rotary Club of Antigua, an Antigua Commercial Bank Junior Savings Account value $300, stationary from Paper Clips, stationery from Harpers and a gift Certificate value $150 from Happy Kids.

The judges were collectively impressed with the level of competition and encouraged students who will enter the competition next year to familiarize themselves with the material for better results.

President of the Rotary Club of Antigua, Adekunle Osoba explained that the exercise is part of the community-based organization’s way of ensuring that focus is placed on improving literacy around the island. He encouraged the students to view the opportunity not just as a competition but also as a way to express themselves in a positive way.

Assistant Governor Dr. Sharon Cordiner also addressed the gathering of students, teachers, parents specially invited guests. She noted that the reading competition will give students the chance to showcase their literacy skills and added that the Rotary Club of Antigua is committed to playing a positive role in the development of the future leaders of this country.

Past President of the Rotary Club of Antigua, Ato Kentish, was the Master of Ceremonies. The audience were not at all left out. Some students present did not go home empty handed as prizes compliments the Antigua Commercial Bank (ACB) were won by those who correctly answered trivia questions during the periods in intermission.

In a Vote of Thanks, a representative from the winning school, Grace Christian Academy, expressed thanks to the Rotary Club of Antigua for hosting yet another successful competition.

The Rotary Club of Antigua expressed thanks to all of the sponsors who made the event possible and did not hesitate to provide prizes for the students, namely: the Antigua Commercial Bank (ACB), Harpers, Paperclips, Tucker on the Grill with Nica, Inet, Bryden and Sons, Happy Kids and Service Project Director for the Rotary Club of Antigua, Kirk Francis.